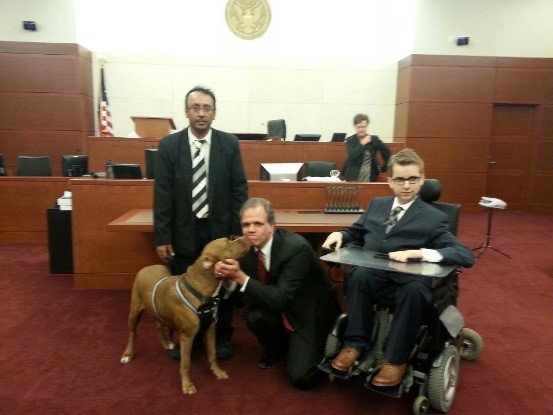 Ajit Bhogaita is a United States Air Force veteran who, like hundreds of thousands of other veterans, suffers from post-traumatic stress disorder (“PTSD”) As a result of his PTSD, Mr. Bhogaita attempted to take his own life, and then medicated with anti-depressants for his chronic depression and anxiety. Because of this disability, he has difficulty sleeping and is unable to form close personal or professional relationships. In 2008, Mr. Bhogaita received a dog, a pit-bull terrier named Kane.  For the first time in years, Mr. Bhogaita could sleep and the dog alleviated his anxiety and depression to the extent that he stopped seeking continual and emergency treatment for his disability.

While his condominium association realized that Kane weighed more than the 25 pound limit, it did not seek to enforce its limitations until 2010. When he received a letter stating that he was violating the pet rules, Bhogaita informed the association that he had a disability and needed an accommodation. When there were threats of further acts, it caused Mr. Bhogaita to panic, and he went back to his doctors at the Veteran’s Administration Medical Center and received letters from his psychiatrist who was familiar with the use of service animals and emotional support animals by veterans. Mr. Bhogaita wrote three letters to the condominium association verifying Mr. Bhogaita’s mental illness and need for Kane, the support dog. This did not satisfy the association, and the association and its lawyer demanded detailed information regarding Mr. Bhogaita’s mental health history, cause, treatment, and future treatment. Mr. Bhogaita said no.

Under the Fair Housing Act, a housing provider is not entitled to unnecessary and detailed medical or psychological information to determine whether a resident has a disability or whether the resident needs an emotional support animal. Matthew W. Dietz, Litigation Director of Disability Independence Group, and Aaron C. Bates, Esq. successfully represented Mr. Bhogaita in trial, and now the case in before the Eleventh Circuit Court of Appeals.

Currently, there are over 180,000 veterans with PTSD who served our country in Afghanistan and Iraq. For all these veterans do for our country, it is obscene that housing providers do not permit an accommodation in rules that will provide
considerable support to ameliorate a veteran’s suffering. It has long been established that the emotional connection between a person and an animal promotes release of oxytocin from the pituitary gland, thus serves to alleviate symptoms of depression and anxiety. It is a simple, beneficial and effective alternative to medication. One of the major goals of the Disability Rights movement is that each person with a disability has the right to self-determination – free from the patriarchal attitudes of the “able-bodied”. We are proud to be able to assist Mr. Bhogaita in allowing him the freedom and the ability to integrate into and live in our society.