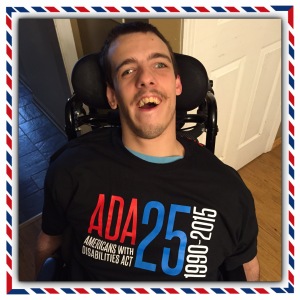 Welcome to this month’s edition of Kids Crusaders as we celebrate the ADA, a law that went into effect 25 years ago on July 26, 1990. My son was born in April of 1991. While we knew from the day he was born we were going to be faced with challenges, we had no diagnosis and no idea what his limitations would be. It wasn’t until he was 4 years old that the ADA even remotely entered my mind. Nick was diagnosed at 10 months of age with Cerebral Palsy and the first few years were spent all consumed with therapies and early intervention programs.

My very first experience where I actually gave any thought or research into the ADA was at a local amusement park. We had taken Nick there for the day to enjoy some of the rides and the waterpark. We paid to park and I do remember that there were parking spots that were close to the entrance that were designated handicapped parking. 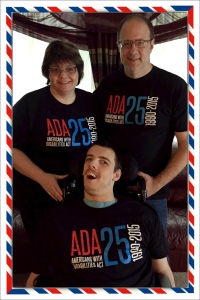 Upon entering the park, we went directly to the section of the park for younger kids. We scoped out all of the rides, being careful to take note of any ride that would accommodate Nick and one of us, as he was unable to sit unsupported. The very first ride was a kiddie roller coaster (imagine more like a few wavy hills instead of “roller coaster”). We stood in line waiting with the other families and Nick was giggling and happy. I walked to the front of the ride to talk to the girl that was operating the ride. I wanted to make sure that one of us would be able to ride with Nick to support him; she assured me that would not be a problem.

After a short wait it was finally time for Nick to ride. I assisted my husband in putting him in the back seat of the ride and my husband got in and sat next to him. It was at this point that a different ride operator approached my husband and told him he would have to get off the ride. I explained to him that I had asked the girl working there before him if it was ok and she had said that it was. He said she was wrong and my husband would have to get off the ride. This was all transpiring in front of the other families. One father approached me and offered to have his 10 year old daughter ride with Nick. I thanked him but declined. It was at that moment that the letters ADA entered my thoughts. Not knowing what the law was, I knew that there was a law that had been passed and my interpretation of that law was that my son should have equal access to these rides just like anyone else. While the discussion started with the ride operator saying that my husband had to get off the ride, it had quickly changed to him saying that my son also needed to get off of the ride. That is where I decided to stand my ground. This was in no way acceptable to me and I honestly didn’t care what anyone thought. I refused to let my husband get off the ride and the ride operator refused to operate the ride. For 15 minutes the ride was full of kids waiting and parents now standing by looking on, some in support of what I was saying and others being extremely rude and saying hurtful things (not worthy of getting credit in my article). Finally the ride operator called the park manager. I explained the situation and he asked if my husband and son would get off the ride so that the other kids could enjoy the ride and I said “No, not happening.” He said he wanted to talk about this someplace other than at the ride attraction. I stood my ground. No. He called park security. The ride was still not operating and some parents had taken their kids off the ride, no longer wanting to wait. Some waited, probably mildly entertained by my refusal to comply. Park security said they were “escorting us out of the park.” That was going to prove to be difficult since my husband was still seated in the ride with my son. I stood my ground. No. The police were called. Ahhh, my ground was standing was starting to shake a little. They asked us to get off the ride and to take the conversation into the office with the park manager. Being asked to take my son off the ride by the police changed up my confidence a bit, so we agreed to go with them to the office to discuss the situation together. Trying to maintain some sense of calm and not sound ignorant, I explained in front of the police that the park was “breaking a law” by denying my son access to this ride. When asked what law they were breaking I quickly began pulling on what little information I truly knew about the ADA. I was informed by the park manager that the park was in compliance with the ADA because they had handicapped parking spaces and handicapped stalls in each bathroom. My response to that, which I would love to share (however the editor may not approve of the language involved), was something that made a huge statement and also got us escorted out of the park by the police. The park refunded our money for the admission but refused to refund our parking fee since we had parked in a designated handicapped spot.

The ride home was about an hour long and I spent most of it crying because I was so angry at what had taken place and at my lack of knowledge about the law and how it applied to our son. I did contact local legal advocates that contacted the park and the park owner called me to apologize. The apology was followed by a…”but” statement at which point I just became even more frustrated. Long story short, the park which was privately owned at that time, through mediation with the advocacy center, expanded their “kiddie” section of the park the following year to include rides and attractions that would accommodate having children ride with their parents. The owner sent a letter to the house with information regarding the changes that were made along with free passes to return to the park along with a cheap, “crunchy” stuffed animal for Nick that you would win at an arcade booth. Still feeling unhappy with our entire experience, I returned the package to the owner and we have not returned to the park with Nick. The theme park was subsequently bought out a few years later by a large well known company and has expanded and is operating to this day. We went to the park once without Nick to see what, if any changes had been made since the purchase of the park. Adequate changes had been made and accessibility is no longer an issue.

For us, that was 20 years ago. The changes that I have seen over the past 20 years have been huge. While I do not have a degree in law, our adventures with Nick over the years and accessibility issues have broadened my awareness and my knowledge base. I have a better understanding of the law and the impact that it has had for people living with a disability. Ten years ago one of our adventures with Nick led us to Matthew Dietz, which led to yet another adventure (but I will let Matthew share that one!)

Disability rights ARE civil rights. Stand your ground, even if it feels like it is shaking. I have always stood mine and will continue to stand mine, knowing that when I take a stand, I take it not only for my son but for others as well.

Thanks for continuing to follow me on my journey. Hopefully there will be a day when a sword will not be needed. There has been a lot of progress made in the past 25 years. Happy Anniversary ADA….

Until next month…live, laugh, love and know that you are never alone.

“The Americans with Disabilities Act (ADA) was signed into law on July 26, 1990, by President George H.W. Bush. The ADA is one of America’s most comprehensive pieces of civil rights legislation that prohibits discrimination and guarantees that people with disabilities have the same opportunities as everyone else to participate in the mainstream of American life — to enjoy employment opportunities, to purchase goods and services, and to participate in State and local government programs and services. Modeled after the Civil Rights Act of 1964, which prohibits discrimination on the basis of race, color, religion, sex, or national origin – and Section 504 of the Rehabilitation Act of 1973 — the ADA is an “equal opportunity” law for people with disabilities.” (www.ada.gov)